RSS
← The Borderlands
The Haunting in Connecticut 2 : Ghosts of Georgia →

X Men: Days of Future Past 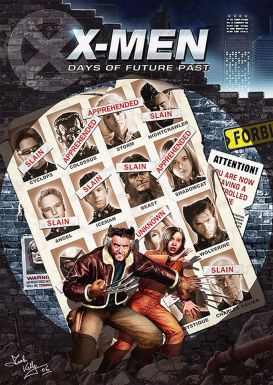 Strap in for the long haul as I have a complete geek-out here. I’ve a been an X Men comic book fan for a long time and though I did enjoy all the previous films I was concerned when they fumbled their attempt at the Phoenix Saga in X Men Last Stand then stumbled again with Wolverine Origins. I was so happy when they went the prequel route in First Class and I really enjoyed seeing the younger take on Xavier and Eric. They followed this with a respectable solo film for Wolverine. And now they have really got their franchise back on track by using the time travel device to retcon away some of their less popular choices from earlier films with a strong character driven story.

Days of Future Past is based on the story in the comics and the script does a good job adapting the story without slavishly following it. The future is a nightmare with mutants hunted down and captured or killed by mutant hunting robots called sentinels that can adapt to any attack from those with mutant powers. The whole world is a war zone and mutants are nearly extinct. Xavier (Patrick Stewart) and Magneto (Ian McKellen) gather with a small group of surviving X Men to try one last desperate attempt to not only save themselves but to prevent the whole nightmare from happening: they want to change the past.

Kitty Pryde (Ellen Page) seems to have developed a secondary mutation where she can send a person’s consciousness back in time to an earlier version of themselves and we see her do this with Bishop (Omar Sy), allowing them to avoid a sentinel attack that nearly wiped them out. Thanks to this ‘reset button’ power the film doesn’t hold its punches when shows just how brutal these sentinel attacks are. We also get to see some nice bits of the X Men working together in battle such as Blink (Bingbing Fan) combining her portals with the attacks of the other X Men. These include Sunspot (Adan Canto) [who seems to have acquired Sunfire’s atomic fire powers], Colossus (Daniel Cudmore), Warpath (Booboo Stewart) , Storm (Halle Berry) and it’s great to see Iceman (Shawn Ashmore) in full ice form using his ice slides.

Kitty’s power is only used for sending someone a couple weeks back at most as any more causes damage to the mind/brain. Xavier wants to go back to the 1970s to prevent the assassination of Bolivar Trask (Peter Dinklage) the scientist who developed the prototype sentinels and was trying to sell them to the US government. When he was killed by Mystique (Jennifer Lawrence) this convinced the government of the danger posed by mutants and also gave them access to Mystique’s DNA which Trask’s company used to develop the lethal future sentinels.

Xavier is not physically capable of surviving the strain of the time displacement so they need to send Wolverine (Hugh Jackman) which has the advantage of making sense in the story and perfect sense for such prominent role to be played by the star of the series. I know that in the comic it was Kitty who went back and in the cartoon series it was Bishop but neither character has much chance of even existing that far back and Wolverine has been the audience entry point to this film series. Fortunately Wolverine is more than adequately balanced out by the other characters in this film.

Back in 1973 Wolverine wakes up in bed with some anonymous woman and he stops to give the audience a lingering look at his naked butt before a gang of thugs break down the door and try to kill him. After dealing with them he goes to find Charles Xavier (James McAvoy) in his family mansion. Xavier is living with Beast (Nicholas Hoult) who looks a bit more human than last time we saw him in First Class. This is because of a magic serum plotholefillium Beast developed which supresses mutations but stops working if Beast gets upset [a bit like the Hulk only blue and furry]. Charles has also been taking the serum so he no longer has his telepathy but for some reason the serum allows him to walk despite the bullet in his spine. Charles Xavier has been broken by events since the last film. Two of his students were conscripted into the army when the Vietnam war started and Mystique left with Magneto so he had no-one apart from Beast. He has lost his optimism and his vision of humans and mutants living together in peace.

Next Wolverine has to get Magneto (Michael Fassbender) who is being held in a non-metallic prison under the Pentagon. Fortunately Wolverine knows someone who can help them, a teenage boy called Peter Maximoff (Evan Peters) otherwise known as Quicksilver. This is one of those strange characters that live in a sort of twilight zone that allows Fox and Disney/Marvel to use them. He was an Avenger in the comics but he’s a mutant and has been involved in X Men related titles such as X Factor. He is a great character, funny and mischievous and the scene of him using his power to rescue them from armed guards is the highlight of the film as we see him racing round the room in bullet time gently nudging things, shifting things into place and when we return to normal time the guards have knocked each other out and all their bullets have missed. [A minor spoiler from the comics is that Peter is Magneto’s son but they only hinted that in the film.]

Now Magneto and Xavier have to get over their disagreements to stop Mystique but they don’t know where she is and since Xavier is powerless he can’t find her but they do know she is going to be in Paris to kill Bolivar Trask as he pimps his sentinel project to various military leaders. Mystique went with Magneto at the end of the First Class film but she has since left him too and now is working on her own for the cause of mutants in very practical ways, such as rescuing a group of mutant soldiers in Vietnam from getting sent to a secret lab as a reward for serving their country. These mutants include Havok (Lucas Till), Toad (Evan Jonigkeit), Ink (Gregg Lowe) and some other guy with spines. Mystique is not targeting Trask because of the sentinels but because of what he did to mutants during his research [in case you are wondering what happened to all the other mutants from First class.]

The mission to change history is going as planned but Magneto decides to try to take things further, leading to a very public mutant battle being filmed by several cameras and of course the mutant threat is the top news story, guaranteeing Trask gets funding for his sentinels. Now they have made everything worse so Xavier has to come off his magic juice so he can use Cerebro to find Mystique and this is where he uses Wolverine to contact his future self and find the reason to go on with the fight. Of course this means Xavier has to give up walking and re-establish his control of his mental powers.

Xavier’s character arc is basically about Xavier becoming the man he is in the other films, a teacher, a leader and a peacemaker. Magneto is already willing to play the role of the villain that the human authorities claim him to be. He may be willing to work with Xavier to prevent becoming victim of another holocaust but that doesn’t mean he will give up plans to launch his own holocaust. Mystique has grown away from both men as she fights for mutants directly on her own and the fate of the world depends on what choices she makes.

Bolivar Trask is an interesting villain with motives that seem to mirror Magneto’s. He is not motivated by hatred of mutants but out of loyalty to humans. He has read Xavier’s academic work and uses quotes from it in his presentation to the military. He does get side-lined by a plot that is more concerned with the interactions of the main characters so doesn’t really get to fully play a villain role but now that they have him set up I hope they make better use of him in later films.

As you can probably tell I really got into this film. The writers have done an amazing job linking up the past with future in a way that doesn’t hurt the head. Even though there are many characters in the film it focuses on Magneto, Xavier, and Mystique with Wolverine and Beast playing supporting roles. The scenes of the future were very brutal so there was always a good sense of how high the stakes were though there isn’t too much time to see any character stuff in the future. The cast are all really great especially James McAvoy, Michael Fassbender and Jennifer Lawrence but a special word goes out to Evan Peters who took a lot of abuse before the film’s release and really delivered a version of Quicksilver that raises the bar for Marvel’s Avengers Age of Ultron film. I highly recommend this film especially to anyone who enjoyed the first X Men films and I’m really looking forward to Apocalypse in two years time

Posted by Peter Anderson on June 6, 2014 in Entertainment, Film

← The Borderlands
The Haunting in Connecticut 2 : Ghosts of Georgia →