Review: Return of the Living Dead 3 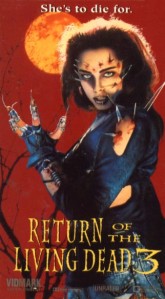 I am a huge fan of the original Return of the Living Dead and while the second film in this series was okay it is a lesser imitation of the first film. I didn’t know that there were further sequels until a couple of years ago when I saw the DVD on sale and I snapped it right up, especially when I discovered that the director is horror master Brian Yuzna. Unlike the first two films this is not a light-hearted comedy but a tragic romance story with zombies.

Curt Reynolds (J. Trevor Edmond) is a military brat, having to relocate to wherever his father Colonel John Reynolds (Kent McCord) is assigned. While stationed near Los Angeles he’s fallen in love with a local girl Julie Walker (Melinda Clarke) who is bit of bad girl. She talks Curt into “borrowing” his father’s security pass so they can break into the secure areas of the military base and find out what they are doing in there.And what they are doing is really pretty f’cked up. They are experimenting on ways of militarising trioxin, the chemical that re-animates the dead that featured in the previous two films. Curt and Julie watch in horror as they reanimate a corpse with trioxin vapour from one their zombies in-a-can, to test a method that has been developed to temporarily subdue them with ice bolts into the brain. Unfortunately their experiment is a failure and they end up with a lab full of wild hungry zombies.

Curt and Julie flee before they caught. In the lab another military scientist Colonel Sinclair (Sarah Douglas) was observing the procedure and uses the failure to push her way into replacing Colonel Reynolds on this project and push ahead with her idea of putting the zombies into lockable exoskeletons. Reynolds thinks her idea is cruel and he’s right but remember that bit about ice bolts into the brain?

Reynolds goes home to tell Curt the bad news that he’s being transferred again. Curt tells his father he’s not going with him and he leaves with Julie on his motorbike to start a life together in Seattle. On the road Julie is excited and frisky and she distracts Curt, nearly causing him crash. When he swerves to avoid hitting an oncoming truck Julie goes flying off the back of the bike and smashes into a telegraph pole and breaks her neck.

Curt is devastated and while cradling her lifeless body sobbing he finds his father’s security pass card. Crazed by his grief he thinks he can bring her back to life. He takes Julie’s body back to the military base and after putting on a protective suit he doses her with fumes from a zombie-in-a-can but he doesn’t close the lid properly and the zombie escapes. Fortunately the zombie comes in handy when they get caught by one lab worker who gets attacked by the zombie, giving Curt and Julie the chance to escape.

Julie is not to happy about being resurrected because she is constant pain, some of which is caused by a strange hunger she has no idea how to satisfy. Curt stops at a late night grocery store to get her something to eat. The only other people in the shop are Santos (Mike Moroff) and his friends Filipe (Sal Lopez) and Mogo (Julian Scott Urena) who is playing video games while the others watch and Santos’ girlfriend Alicia (Pía Reyes) complains. Julie really is making a mess trying to eat different things to sate her hunger but nothing works. While Curt tries to clear up the mess he bumps into Santos who angrily confronts him. The store owner (Dana Lee) tries to intervene, brandishing a hand gun but he gets shot in the gut by Santos for his trouble. The gang flee but as he’s leaving Julie takes a bite out of Mogo’s arm .

Julie and Curt have to leave as well since the military are looking for them but Curt agrees to drive the store owner to hospital in his van. The police arrive and chase after them, shooting at them. The store owner tries to call out the police from the back of the van but the police shoot him in the head killing him. Curt manages to shake off the police and he stops in a blind alley. He is horrified to find that Julie has started munching on the brains of the dead store owner. The police find the van but Curt and Julie have escaped down into a storm drain. One of the policemen is killed by the reanimated store owner but the military arrive just in time to save the other one. They are led by Reynolds who is desperate to save Curt.

Curt and Julie make they way down to the river through the drains. Curt realises what a selfish idiot he has been and in his frustration he lashes out at Julie who runs off. He regrets it right away and goes after her but fails to stop her throwing herself from a bridge into the river. Curt searches downstream for Julie and meets Riverman (Basil Wallace, a homeless man who lives in the drainage tunnels by the river. They find Julie but then so does Santos’ gang who are not happy about her biting Mogo who is getting very sick because of it.

Riverman takes them into his secret hideout. Julie has found a way of coping with her hunger – by inflicting pain on herself she can return to feeling normal and forget her hunger for awhile. She pierces her flesh with various sharp things she finds lying around. The gang find Riverman sitting outside his hideout and attack him. Curt goes out to help Riverman  but he’s overpowered quickly. Then the door opens and Julie appears and she really has been busy turning herself into one of the craziest most badass zombies ever, her flesh pierced by chains and nails and glass and spikes embedded in her arm, in short she makes herself  into make-up effects masterpiece shown in picture above from the DVD cover. She seduces Santos into going with her alone into the hideout where things go very badly for Santos. She quickly attacks and kills Felipe, meanwhile Mogo has died and reanimated and then attacked Alicia. Riverman realises they are deep in it and gets Curt and (reluctantly) Julie back into his hideout. The zombie gang attack the door and as it starts giving way Curt tells Riverman to get Julie out the back way while he tries to delay the zombies to give him time to get away

Reynolds arrives just then and takes care of the zombie gang with his ice bolts. Curt runs after Riverman and Julie but finds that Julie has killed him and eaten his brains. Thinking she has gone totally mad with hunger he stands by and lets his father shoot her with an ice bolt.

Back at the military base Curt has been debriefed and is now wanting to know what is going to happen to the zombies. He wanders around the lab till he finds where Julie is being kept and sees Colonel Sinclair putting a metal exoskeleton onto Riverman and locking it to stop him moving. One of assistants tell him that Julie is next which makes rush to try and unlock her cage. RIverman’s exoskeleton gets unlocked in the struggle to stop him. Riverman goes on an unstoppable rampage against the lab staff also smashing open several zombie cans and throwing Sinclair into the storeroom with them. as the lab staff fight back he gets limbs basted away with a shotgun but can still move thanks to the exoskeleton and proving it really is a very effective way of weaponising the trioxin zombies

The security breach has triggered the security system and sealed them in the lab. Curt frees Julie and persuades Riverman to open the locked door to the lab.The canned zombies Riverman freed are running through the lab complex and munching through most of the staff. The whole complex is sealing up while Curt tries to find a way out and his father is trying to find him.

Curt suddenly gets bitten in the arm by the same zombie he freed while re-animating Julie. His father finds them and pleads with Curt to come with him while he hold the security door open but Curt shows Reynolds the bite. Reynolds has to let the door close and watch Curt and Julie go together into the lab complex. Curt takes Julie to the incinerator and Curt promises they will be together forever and then enter flames and burn together.

This really marks complete tonal shift from the dark humour of the original film. Curt’s love for Julie is like mental illness and it drives him from one crazy action to another and the consequences are tragic for a lot of  the people who cross their path. His clingy desperate love created the monstrous bad ass zombie Julie. J Trevor does a pretty good job as the naive teen but the biggest acting credit has to go Melinda Clarke who really turns in a very touching and dangerous performance as Julie.

The zombie effects are done using a mixture of make-up and animatronics with mixed results but I  thought it looks pretty good considering what looks like a very tight budget. [Geek Whine Moment Some people complain about this film having people becoming zombies after being bitten by one which did not appear to happen in original film. While this is true it certainly can’t be ruled out as a possibility in that film and remember what the military did at the end of that film. If it could not be spread by the zombies why take such drastic action? Anway I really could not care less and I will never let such nit-picking interfere with my enjoyment of this film Whine Moment Over]