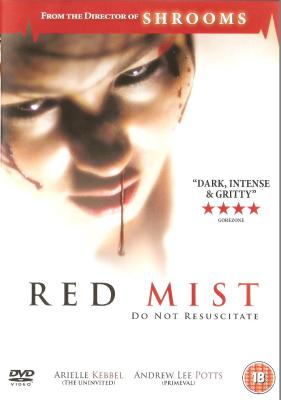 This film has the alternative title Freakdog which actually is a bit more relevant to the plot than the meaningless UK title. This is another supernatural vengeance thriller that doesn’t really do anything new with the story

A group of medical students like to party hard after work at the hospital. They are a bunch of typical students and include Sean (Martin Compston) who is an arrogant nasty little prick, the stuck up goth girl Harriet (Katie McGrath), Kim (Sarah Carter) the abrasive one, the Asian student Yoshimi (Christina Chong), the undeveloped extra Steve (Michael Jibson), and finally Jake (Alex Wyndham) and Catherine (Arielle Kebbel) who are a couple. Kenny (Andrew Lee Potts) the socially awkward janitor at the hospital womes into the bar and wants to talk to Catherine and the others make fun of him and want him to just go away. Before Kenny leaves he reveals that he knows they are taking drugs stolen from the pharmacy. Their hospital has a zero tolerance policy toward drug abuse and their medical careers would be over before they had even started if he grasses them up.

Their plan is to get him back into the bar and give him booze and drugs so he wouldn’t be able to grass them in. Catherine hadn’t liked them bullying Kenny but she agrees to get him back into the bar. They feed Kenny a dangerous combination of drugs and alcohol until he has an epileptic seizure and ends up in a coma. Catherine wants them to come clean and take him to hospital but Sean convinces the others that they need to cover up their involvement so they dump Kenny on the road outside the hospital.

Kenny is admitted to the coma ward and he has no family so the hospital are monitoring his brain for any signs of life and if they don’t see any sign of recovery his life support will get switched off. By an amazing coincidence the doctor in charge of the students has developed a new drug that may be able to help activate the brain in patients like Kenny but it hasn’t been approved for human trials yet. He told the students about the drug at the start of the film so Catherine forges the signature of Doctor Harris (Stephen Dillane), who is in charge of the coma ward, and gives a dose to Kenny. The immediate reaction is Kenny’s heart rhythm getting erratic before having a heart attack and Catherine has to use one of those electric shock heart machines. After he is stabilised Catherine leaves before she gets caught and misses the brain scan going crazy.

In the hospital garage Catherine goes to her car and one of the other medical students Yoshimi is getting in her own car when she’s attacked and killed by the hospital security guard. Catherine tried to help but got thrown off by the guard and knocked out.

Next night when Catherine hears about Kenny’s brain scan she decides to give him another dose and this time there’s no emergency but she sees the brain scan respond. In another part of the hospital the nasty selfish prick student Sean gets murdered by a nurse that he’d been having sex with just the night before.

Catherine starts to figure that Kenny is killing them off by possessing people and after he’s finished they have no memory of what they have done. The only sign someone is possessed is a nosebleed. Catherine is just going to stop dosing Kenny with the drug but unfortunately Doctor Harris knows what Catherine has done and senses a medical breakthrough. He’s going to continue Kenny’s treatment meaning the rest of the students getting murdered one by one and only Catherine knows what’s going on.

This is another forgettable film that is okay to watch but nothing about it really sticks in the mind. It’s another version of the tale of a victim of bullying taking vengeance on those who hurt him and there really is no depth to the characters.

Posted by Peter Anderson on December 7, 2013 in Entertainment, Film