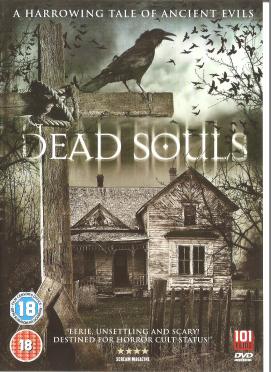 The cheap Photoshop cover design should have been a clue

Like many of many of blind buys this was going cheap in the DVD section of the supermarket. Sometimes I‘ll discover a hidden gem or a total turd. This is one of the other types, an unremarkable film that goes through the paces of an unoriginal forgettable story. It’s clear it has a low budget and I think was made for one those US cable TV channels called Chiller

A few days after his 18th birthday Johnny Petrie (Jesse James) finds a letter addressed to him from a lawyer Andrew Judson (Jaiden Kaine) that his controlling mother Mary (Geraldine Hughes) hid from him. Mary does not let Johnny have a mobile phone, watch television and will not let him even go to college (yet she still lets him attend a public school which seems inconsistent). Making Mary into a religious nut mostly seems to be a way to explain why an 18-year-old would not have a phone.

It turns out that Johnny has inherited a house and its estate in Maine from his family and Judson wants to meet John to sign some papers so that he can get on with selling it. The film actually opened with a minister killing his family and nailing them all to wooden crosses in the barn. A young boy managed to hide his baby brother from his father before being killed so it’s no real mystery to us that Johnny is the baby. When he asks his mother she starts freaking out and collapses. She gets admitted to hospital and kept in for observation.

While Mary is in hospital Johnny goes to talk to Judson in Maine. I can’t remember the name of the town but it was something like Wetwipe. As he gets of the train he’s greeted by three teenage bullies led by Mack (Noah Fleiss) who seem to know all about him and when he would be arriving. They are too young to remember the murders so their attitude seems to stem from the needs of the plot especially since none of the other locals express concern about him being back. Is this hint of a deeper plot? No it really isn’t.

Johnny and Judson go out to the house and Judson shows him around but he seems to be in a rush to get Johnny to agree to sell the property and leave. He does tell Johnny that the house was his father’s and that he was the only survivor of a terrible accident that killed his family. Johnny wants to take some time to look the place over on his own and see if he can learn something about them.

As soon as Judson leaves Johnny feels nervous since this probably the first time he’s been so alone. He starts hearing sounds of someone moving around upstairs and just when I was expecting some ghosts to start doing stuff it turns out that Johnny has a squatter, a runaway called Emma (Magda Apanowicz) who never does tell Johnny what she’s running away from. Emma becomes a love interest eventually but now her role is someone for Johnny to talk to.

There’s a few more false starts involving Mack and his buddies followed by a visit from a local madman Sheriff Depford (Bill Moseley) who knows what’s going on and how to stop it, but of course he gets dragged off by the police who also kindly explain to Johnny that his name was originally Bryan and that his family were murdered by his father.

Finally we get to see the spirits of his family as they creep around for the benefit of the audience but of course go unseen by Johnny or Emma. The film then goes into the third act and as the mystery is unravelled I felt a strong sense of “hunh?” I know that these sort of stories need some mystical bollox explanation but this was just an incoherent jumble of made-up things that somehow justified what happened. It just wasn’t developed enough and I felt disappointed. A lot of characters get killed at the end too but it seemed very rushed. Overall I think I don’t have strong opinion about this film.

Posted by Peter Anderson on July 23, 2013 in Entertainment, Film