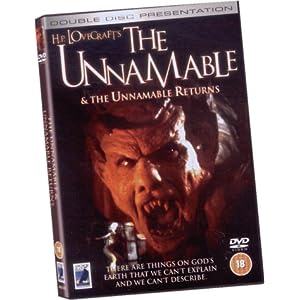 I am afraid this film continues the tradition of failure that seems to haunt adaptations of the stories of H.P. Lovecraft. I think the original story was a reaction by Lovecraft to criticism of his habit of using adjectives like Unnamable as a substitute for a proper description by creating a story where Joel, a critic of just such a habit by the character Carter is brought by Carter to face a creature that Joel himself calls Unnamable at the end.

The films opens with an old house where a worried old man lives with some screaming monster that he keeps locked in the attic. He says he is trying to civilise the creature which is his daughter but for some reason he seems to have mad turn of believing he can succeed and frees the creature which promptly butchers him. Local people quickly bury the old man and seal the house completely.

This is all just a story being told by Randolph Carter (Mark Kinsey Stephenson) to his friends Joel Manton (Mark Parra) and Howard Damon (Charles Klausmeyer), fellow students at prestigious fictional Miskatonic University in Arkham in Lovecraft country. Joel ridicules Carter’s use of the “unnamable” adjective reasonably arguing that if it can be seen or experienced with the five senses then it can be described. Carter then drops the bombshell that the story is as was reported and happened in old abandoned house by the edge of the cemetery.

Joel dares Carter to spend the night in the house calling him out on his bravery but Carter really does not rise to it and refuses the challenge, pointing out that he’s not the sceptic and he believes it to be a dangerous and foolish stunt but Joel can go ahead on his own if he really believes there is nothing to fear. I’m not sure I have really adequately conveyed how smug and arrogant Carter is in this film.

This arrogance of Carter’s is what prompts Joel to declare he will go and stay at the house in the hoping to wipe that smug grin off Carter’s face. Joel goes the house and looks around and eventually heads up to loft. He hears noises and thinks Carter is trying to scare him. He then gets jumped by some unseen creature which tears him apart.

Up to this point I was fairly happy with the film and it did seem to have some basis in the original story. But a this point the story starts to take another more familiar shape. Two college jocks John and Bruce are chatting to two new girls, Wendy and Tanya. Howard likes Wendy but she doesn’t like him while Tanya like Howard who barely notices Tanya. Bruce and John convince the girls to go to old haunted house with them by claiming it is used for sorority initiations and they can get some advance knowledge. It is a BS excuse and everyone knows what’s really going on and while Wendy is happy enough Tanya isn’t.

Yes, a Lovecraft story been turned into yet another formulaic film about a group of students who go to an abandoned scary house to make out and get killed. Meanwhile Howard is worried that they have not heard from Joel but Carter dismisses his fears at first. It’s only much later after Howard has checked with Joel’s family that Carter agrees to go the old Winthrop house with Howard.

I really was disappointed with this film. The elements from Lovecraft seem to work even if the guy playing Carter is an enormous ham. But the reduction of a Lovecraft horror to a haunted house monster story really just irritates me. It is like there are two films running concurrently and every moment spent with Howard  and the shallow screaming girls from the haunted house story is a distraction from the real story. The effects are quite good and the creature looks okay but it really doesn’t look unnamable, in fact she has a name Aliydah or something that we hear her called over and over by her father’s spirit at the end.  Oh, yeah, the end. When Carter and Howard get to the house Howard springs into action looking aroung the house for Wendy with Tanya

But Carter finds a room full of old books that turn out to be grimoires and of course includes the Necronomicon and while the monster is chasing and killing students upstairs Carter plonks himself down for some reading. At the end it all pays off when he gets an “of course” look in his face and takes the Necronomicon outside to the graveyard. He opens up one tomb then whilst reading spells from the book he descend to do battle with whatever, tree spirits or something.  But we don’t go with him and instead we go back Howard and Tanya battling Aliydah until Carter’s spells work and a tree reaches in and drags away Aliydah. When it’s all over Carter crawls out of grave and with bony hands trying to drag him back. This is a very abrupt ending and it was just groan-inducing for me especially when Carter makes reference to something he saw down in the tomb as being unnamable – argh! stupid cheat ending dumb film

Posted by Peter Anderson on October 2, 2011 in Entertainment, Film

This is one of my favourite films, a classic H.P. Lovecraft adaptation from director Stuart Gordon and producer Brian Yuzna.

Synopsis: Herbert West  (Jeffrey Combs) is an obsessed medical researcher who enrolls in Miskatonic University to continue his research into bringing the dead back to life. He blackmails his room-mate Dan Cain (Bruce Abbott) into assisting him in his research by threatening to reveal Dan’s relations with Megan Halsey (Barbara Crampton), daughter of the university’s Dean. When Dan naïvely tells Dean Halsey Robert Sampson) about their research he threatens to expel them. West is determined to keep going so they sneak into the hospital morgue to continue their research but are disturbed by the Dean who is killed by an out of control reanimated corpse. To cover up his death West reanimates the Dean. The Dean’s condition as violent mindless zombie raises the suspicions of Megan and university professor Dr Hill (David Gale). Hill tries to force West to turn over his research to him but instead West cuts off his head. West then reanimates Hill’s head and body but Hill is far from helpless and he escapes to plan his revenge.

There is so much about this film that I love. Combs is just marvellous as Herbert West, playing him as an amoral monster.Most of  the humour in the film comes from the vicious contempt West shows to everyone else, especially towards Megan and Dr Hill. David Gale gives great performance as Hill, a man desperate to stay top dog. Bruce Abbott is very pleasant to look at and I’m sure others will say the same about Barbara Crampton

The effects are probably a little dated but I don’t think that detracts from this film at all. Modern CGI effects rarely disgust me like these older effects still manage to. I think fluids like pus and vomit gore are still better as real fake fluids than any CGI equivalent I have seen to date especially when they are dripping from an actor.

Another thing I like is the wonderful score by Richard Band, a theme that builds in tension then decays into madness perfectly matching this film

I read the original Lovecraft story “Herbert West – Re-Animator” after watching this film and I was surprised to find that the film was toned down quite a lot from the book. I suppose I should warn those concerned that this film is violent, gory and has some nudity in it.

Posted by Peter Anderson on June 27, 2011 in Entertainment, Film