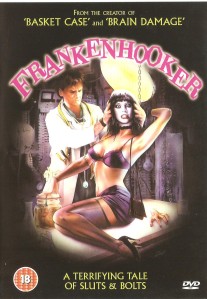 For the second film of my October horror special I’ve gone for a very different tone of film. Anyone who is a fan of low-budget 80s horror will probably have heard of Frank Henenlotter’s Basket Case films or exceptionally strange Brain Damage. He makes low budget exploitation horror films that stick in your mind because of the compelling weirdness he includes in his films. This film sees him adapt the classic story of Frankenstein to modern-day America and give the story a twist of his own

Jeffrey Franken (James Lorinz) is a young amateur mad scientist and surgeon and before the titles we see him working with a brain with an eye and we see his casual approach to brain surgery to get the creature to respond. There’s a big birthday party for his girlfriend Elizabeth’s (Patty Mullen) dad in the garden and his gift is a remote control lawnmower designed by Jeffrey. This leads to a tragic accident and Elizabeth is killed. More than killed she chopped up into pieces and sprayed over the shocked party guests.

Jeffrey was hardly the most stable person before the accident but he seems to have gone crazy. His mother is worried about him and it turns out that he’s worried too. He’s lost any sense of what’s right and wrong and thinks he’s becoming dangerous. His mother offers him a sandwich. Jeffery has been working on a way to bring Elizabeth back to life but all he has left of her is her head. So he needs parts to make her a body. He tries to think of a way to gather parts and uses a power drill right into his brain to help him think. He comes up with the idea of going for hookers since they are selling their bodies.

He goes to New York and quickly finds a hooker who takes her to see her boss Zorro (Joseph Gonzalez). Jeffrey tells him that he wants about six women for a party. He also buys crack from Zorro. That night he creates his own lethal super-crack in his lab  and tests it on a guinea pig which explodes. He reasons that he’s not killing anyone if they take the super-crack and die since he’s not forcing them to take it. Another drill into the brain helps him with his “reasoning”.

Next night Jeffrey is in a hotel room with a bunch of Zorro’s women and he’s dressed up in a comedy doctor outfit. He measures all the women and takes notes but he can’t decide on any one woman. He also starts having doubts about what he plans to do and just gives them the money in a bag. Also in the bag is a load of his super-crack. Jeffrey tries to stop them taking the crack but I wonder how sincere he is considering that earlier scene. Soon the women are smoking super-crack and dancing around semi-naked.

Zorro has gotten bored waiting in the hotel lobby for his women so he heads upstairs. Meanwhile in the room the woman all start blowing up and within minutes Jeffrey is alone in a room full of body parts. When Zorro hears the noises of the women blowing up he tries to get in. Jeffrey puts the parts into black bags and loads them into his car promising them that he’ll put them back after he fixes Elizabeth.

Back in his shed/laboratory he selects the parts to make a body for Elizabeth and puts the leftovers in the nutrient bath in a freezer. He assembles the parts, putting Elizabeth’s head on last and then he activates the Frankenstein-style electrical apparatus that includes a platform that rises with the body right up into the storm.

The is mad science so of course it works and when he brings the platform back down she’s standing up under the sheet she was wrapped in. She has purple hair now and instead of talking like Elizabeth she speaks like one of Zorro’s women. She demands money and since Jeffrey doesn’t have any she throws him aside knocking him out and she leaves. No-one notices that the lightning also hit the freezer full of nutrient with the spare parts and things inside started to move around

The Elizabeth creature heads back to New York where she keeps repeating the last things the women said before they blew up. She picks up a customer who is very excited. When she has sex with the man her pussy electrifies the man and his head blows of with a smile on his face. She takes money from the man’s wallet and leaves happy. She meets a man in the street who forces himself on her but when kisses her he gets electrified and his head blows off.

Back in his lab Jeffrey comes round and sees Elizabeth is gone. He remembers Elizabeth talking like a hooker and figures she’s gone to New York so gets in his car and races off to find her. Elizabeth has got to Zorro’s club where she is getting chatted-up by a rival pimp but she just keeps repeating things the women said and Zorro hears it. The pimp pawing at her goes under the table and the implication is having oral sex when he gets electrified and blows up. Everyone starts panicking and running from the club. Zorro confronts Elizabeth demanding to know what she knows. She pushes him away and he hits her knocking her head almost completely off but it’s still hanging on with some skin and sparks are flying out of her neck. Jeffrey comes into the club and finds Elizabeth. He puts her head back on and then leads her out to his car

Jeffrey fixes Elizabeth’s neck with large metal fasteners and gives a dose of mains electricity. This brings her around but this time she is Elizabeth and she’s not very happy with what Jeffrey’s done. Jeffrey tells her she was dead but he brought her back and she realises that it is a great breakthrough. Just then Zorro arrives and he creeps up behind Jeffrey and cuts off his head.

The freezer full of nutrient suddenly breaks open and all sorts of strange combinations of body parts come out. They attack Zorro and drag him screaming back in to the freezer. Elizabeth picks up Jeffrey head that is soaked in nutrient and promises she’ll fix him.

Next scene Jeffrey is alive and we see his head in close up. Elizabeth has managed to transplant his head onto another body. Earlier Jeffrey had mentioned that he was only half successful with his technique but because he uses oestrogen in his nutrient solution it only work on female body parts and so Elizabeth has given him a woman’s body.

This film is just perfect Henenlotter, with the mad outsider protagonist and the sleazy urban settings. James Lorinz is perfect as Jeffrey with his constant mumbling delivery of Jeffrey’s increasingly insane inner monologues. This is not a film for everyone but if you like low-budget 80s exploitation horror you’ll probably enjoy this one

Posted by Peter Anderson on October 2, 2012 in Entertainment, Film