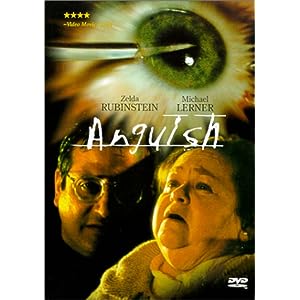 This 1987 film Spanish director Bigas Luna is one of the rare finds, an intelligent and disturbing well-made horror that I had never heard of. I really think if you have not seen this film you should before you read any reviews of it since it such an easy film to spoil but it seems a hopeless task since even Amazon give it away the twist in their product description  My advice if you think you might want to see this film don’t read any more about it anywhere, don’t read product descriptions or websites or anything just get it and watch it.

Okay I’ll do a small spoiler free synopsis and put in a page break. We get a warning  “During the film you are about to see you will be subject to subliminal messages and mild hypnosis. This will cause you no physical harm or lasting effect, but if for any reason you lose control or feel your mind is leaving your body – leave the auditorium immediately. I know it’s a schocky old stunt but it makes sense later.

John Pressman (Michael Lerner) lives with his mother Alice (the late Zelda Rubenstein) in her flat. John keeps pigeons while his mother keeps snails. John is an orderly at an ophthalmic hospital who maintains a large collection of eye samples. While helping a patient put in her new contacts she complains that they are causing pain. She needs them taken out again but John insists they will feel better in a minute and runs away upset while the patient shouts for the doctor. There’s quick cut to Alice at home listening to what’s happening at the hospital in large porcelain snail shell. The nurse apologises but the patient insists on seeing the doctor next time. Alice swears she will make the woman pay

John is at home slobbering down his dinner while pathetically asking for Alice for praise and reassurance but Alice is delusional and believes John is a surgeon not just an orderly. She hypnotises John and the film really shows a lot of the process there with a thudding heartbeat and the image of the spiral on the turntable all while Zelda’s weird whisper reaches out into the listener’s brain.

John appears at the the house of the contact lens patient while she is getting ready to go out to a party with her husband. John tells them she was right about the lenses at the hospital, they were the wrong ones and he has the correct ones with him. She is still angry with him but she agrees to let him put these lenses in for her. She’s pretty happy with new lenses and while John is apologising again and thanking her for not complaining about him to Dr Murphy he pulls a scalpel out of his bag and slices her throat open. Then he goes to work cutting out her eyes (implied not shown).

Her husband comes up to see what’s taking so long and sees her body on the floor. John chases him through house and kills him Then John hears a phone ringing. It is his mother’s phone and he can hear it through their mental link. A woman has called from the hospital to talk about John but before she gets to say anything his mother has quit for him and is boasting John is the best surgeon they’ve got and they’ll be sorry. In her paranoid delusion she drives to John to carve out his victim’s eyes for her.

spoilers from now on

The scene pulls out and widens out to reveal that we are in a cinema watching film called The Mommy, a gory exploitation shocker. Patty (Talia Paul) a teenage girl is freaked out by the film and she wants to leave, but her friend Linda (Clara Pastor) doesn’t.  Back in The Mommy here’s another hypnosis session and this time we get to see it having different effects on the audience members  It is making Patty feel dizzy but she’s afraid to go out to lobby alone. The Mommy is intensely trippy at this point and we get to see more than enough to feel an effect.

After the hypnosis session John is ready to go out and carry out mad murderous deeds for his mad mother. John goes into a cinema to showing the silent classic The Lost World and we hear Patty and Linda commenting on it almost like Mystery Science Theatre or some type of alternative commentary track, Patty is scared it will be too much while Linda thinks it will be cool.

John has sat at the back behind the customer sitting furthest back. He seizes him from behind and sticks a spike into his brain killing him. Patty is getting nervous about the other people sitting near her. Patty has finally has too much and says she is leaving and gets out to lobby and go to the toilet. She feels faint and dizzy and hallucinates Alice’s voice. Then she sits in a cubicle and hears someone get in the cubicle next to her and because she farts and mumbles and wear trainers Patty thinks it’s a man. She runs back to Linda and tells her. Linda agrees to check it out since she needs to go to the toilet anyway. There Linda sees the women in masculine clothes that Patty thought was a man

Back in The Mommy John has just killed a man while his wife was away buying snacks. When she comes back she doesn’t look round at her husband but has her eyes eyes glued to screen while she offers him popcorn. To avoid her raising the alarm John pretends to be her husband and reaches around his body to take some popcorn before knocking her out with ether then killing her. Johns hears his mother calling to return back home but John is getting sick of the strings.

Meanwhile the nervous customer (Àngel Jové) across the aisle from Patty gets up and goes out to the foyer. Linda is just coming back out of the toilet when she she sees the nervous man shooting the cinema staff dead. She sneaks back quietly into the gents toilet behind her and hides in cubicle. She has to hide there longer than she thought because the killer uses the cubicle next to hers to dump the bodies.

A couple sitting right behind Patty are concerned since she is alone and genuinely looks horrified by the film. The man gently taps her shoulder and asks if she is all right. She says is wondering where he friend is and so he agrees to go out to look for her while his wife comforts Patty. The man goes into gents toilet and gets shot dead by killer.

In the film John locks the doors and ties the auditorium exits with velvet rope The real killer does the same to to doors of the real auditorium with modern barriers both men mumbling to Mother. Linda manages to get out and across the road where she stops a man walking past and begs for help in tears.  The man really doesn’t seem to believe her when she tells him there’s is killer in the cinema.

The woman behind Patty goes up to see what happened but the killer grabs her as she goes to leave and shoots her. (Silencer is unrealistically effective but let it slide it’s only a film ( in a film ( in a film)). The man with Linda asks where Patty is so he can go into cinema and find her but Linda begs him not to. He goes in and finds the bodies and the tied-up doors and realises what Linda said was true. The killer sits down behind Patty and holds his gun to her head. Just then the people in the cinema in The Mommy are finding out about the killings and the projectionist has called the police.

Alice has gone crazy and dropped her bowl full of snails, smashing them over the floor. She releases the pigeons. She calls for John to come home. John is confronted by the audience but he stabs one man and grabs a teenage girl as a hostage. The real killer has started screaming at the screen and at John’s character. Then he starts shooting at the people in the auditorium while keeping hold of Patty as a hostage. The real police arrive and look for their chance to shoot him while he reacts to the film like he is a character in the film. They finally get their chance. This gets mixed with the similar climax in The Mommy. Then as that film finishes John turns out to face the audience and thrusts his scalpel out saying “I want your eyes too,” and Patty screams hysterically thinking she has really been stabbed in eye by John.

Patty is taken to hospital to recover from her shock. Linda wants to stay with her but the Doctor says no. Linda leaves but she is attacked by an unseen assailant. He then wheels his trolley to Patty’s room where he turns to face her and Patty sees it is John who says to her, “Like the doctor says it’s all in your imagination. I really don’t exist” and as he approaches she screams and the titles roll. The camera pulls back to reveal that we were in yet another cinema all along watching Anguish

With this film I get the feeling of having got two different film for the price one and the whole thing is definitely greater than the sum of it parts. I loved the over-the-top melodrama of The Mommy with its grisly eye horror, vengeful madwoman and deeply trippy hypnosis scenes but I also thought Anguish itself was nice tense thriller film too all framed nicely together to form a wry and entertaining examination of the relationship between the audience and the film. This film had me gripped me right up until the old man in the cloth cap got up and left the cinema.

Posted by Peter Anderson on October 4, 2011 in Film